Jeff Gordon has another video for Pepsi Max.

Comments Off on Test drive II |

The one and only

Not long ago we included a picture of the
1963 Chevrolet Testudo in a post about cars
you’ve probably never seen.

The car was a one-off prototype built by
Bertone, an Italian car maker for GM. The
body was built on a beefed-up Corvair
chassis with an 81 hp engine.

It got all 81 hp to the ground via a four-
speed manual transmission. The car had
independent suspension, coil springs, drum
brakes, and a 94.5 inch wheelbase.

The interior was cutting edge for the day
and you can see features that ended up in the
C3 Corvettes.

The exterior design is said to have
influenced the Corvette, a Ferrari, a
Lamborghini, the AMC Pacer, and the Porsche
928!

It was originally shown in metallic silver but
was painted pearlescent white not long after
its debut. The headlights pop up, the tail-
lights were polycarbonate plastic and mounted
in the bumper.

You got in through a forward hinged canopy
and it had a glass roof and wraparound
windshield.

The moniker “Testudo” is a Latin root for
the word turtle. This was chosen because
it was thought the aesthetics of the car did
resemble a turtle.

Ironically, a few years after it debuted the
car was involved in a wreck with another
Bertone one-off car and wasn’t repaired. It
sold in 1974 in damaged condition and the
new owner commissioned chief designer Luciano
d’Ambrosio to supervise a full restoration.

And that ends the tale of the most
influential Corvair that never was.
Comments are always welcome.

One line of song by Waylon Jennings is
“I’ve always been crazy but it’s kept me
from going insane”.

With our current societal climate we have
to wonder if everybody isn’t crazy. Bear
with us and we’ll explain.

Recently the government bailed out the
automakers, lowered social security benefits,
decimated Medicare, played gun runner to
Mexican drug dealers, spied on all of us,
and ignored our Constitution.

Congress has had investigations with no
results, our National debt is the highest
it has ever been, and a state filed for
bankruptcy.

God can’t be in our schools but sex ed
and free condoms can.

We are told not working and being on welfare
are good for our economy while most jobs that
are available pay minimum wage.

We are bombarded with propaganda about the
“greedy corporations” from people who are
themselves millionaires. And few see the
irony.

Global warming is now the cause of our
frigid winter, illegal aliens may soon become
magically legal, and anyone who disagrees is
a racist, anti-gay, a flat-earther, or worse.

Our country isn’t broken, our government is.
Yet we citizens keep electing the same inept
people who brought us all these problems in
the first place. Or are we missing something?
Comments are always welcome. 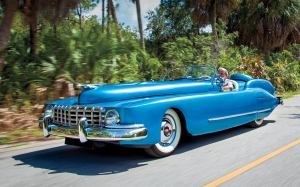 Or if animals could talk?

What if you had an army tank and…

If you missed the automobile parade
in New York City on February 6,
1900, you can watch it now.

If you never saw a nuclear bomb
explode.

With that we’ll end this post and
find out what happens if I want
more coffee.
Comments are always welcome.

A friend sent us this and we’re still
smiling so we thought we’d share it
with you. If you are old to remember
it will put a smile on your face too.
Comments are always welcoem. 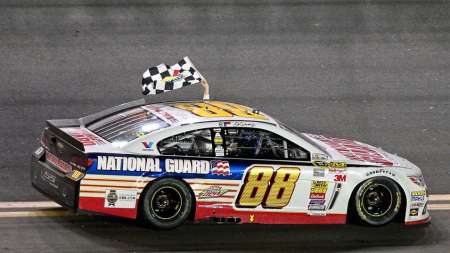 When we first turned on our TV today, we
didn’t plan on it being on over ten and half
hours. The Daytona 500 was supposed to be a
four hour race.

If you watched all or part of it you know
there was a rain delay of six hours, 21
minutes, and 40 seconds, and some big wrecks.

We were glad to see Dale Earnhardt, Jr. win
the second Daytona 500 of his career after
all was said and done. He is the fan favorite
for a reason.

Even with the delay it was worth the wait.

We felt our post on concept cars didn’t go
quite far enough so we looked until we found
some appropriate videos that we hope fill in
the blanks. We’ll even toss in a hot rodded
tractor, a car show, a movie, and a song.

This video show what our cars may look like
in the not too distant future.

A longer look at concept cars and thier
purpose for being.

Going back in time, this one looks at the
1955 Ghia Streamline X concept car.

Another old video and this time of a Corvair
truck that you may have never seen.

Footage from the 2013 Rust Revival show.

For a movie we turn to Andy Hardy.

And for music, a little ZZ Top.

Enjoy the diversions, we’re going to
get some popcorn and a Coke.
Comments are always welcome.

Comments Off on Weekend diversions |

This week we cruised down Memory Lane
and took a hard look at the present. Now
we’re going back to the future.

Concept cars are designer dreams come to
life. Some of them might even look like
what we will be driving in 25 years.

All are futuristic, and some are hard
to comprehend. We’ll mention a few here you
may not have heard of or seen.

The Audi Shark is basically a car without
wheels. It does have 4-rotor hovercraft
mechanicals for vertical take-off.

The Cadillac World Thorium Fuel is a strange
bird. If you look closely, it has 24 wheels!
Six tires on each rim. And if that doesn’t
qualify it as wild, it is nuclear powered.

Another vehicle from the more wheels the
better school of thought is the KAZ Eliica.
The eight wheels are powered by an electric
motor with the equivalent of 850 hp and a
top speed of 230 mph.

The Citroen EGGO looks like the end result
of a shopping cart and golf cart making love.
It has 4 wheel electric drive with a rooftop
solar power charger.

The Venturi Eclectic is a different take on
the above. It is another electric vehicle
with solar panels that can hit 30 mph with a
30 mile range. Claim is if there is enough
sun where you use it you would never have to
plug it in.

The Ford Gyron proves that what was wild in
1961 can still look wild today. Dubbed a land
speeder, it has two wheels and a gyroscope to
keep it balanced. 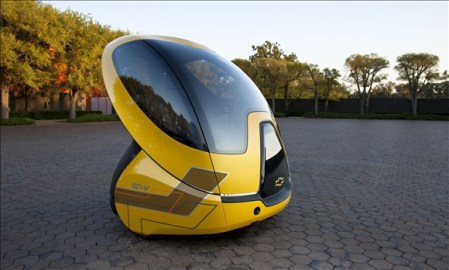 From 2009 comes the General Motors EN-V. For
some reason we can’t fathom, GM and Segway
are responsible for this 2-wheel upright that
runs on 2 electric motors. Claim is it can do
25 mph, run 25 miles between charges, and
that it is an autonomous transportation pod
that can drive itself. 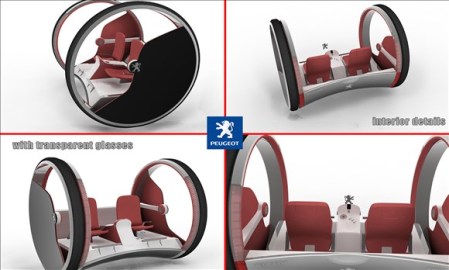 The Peugeot Ozone is a two-wheeled, fuel-
cell/electric motor vehicle that defies
description. We don’t know much about this
one other than it doesn’t look like something
we’d take on the interstate. 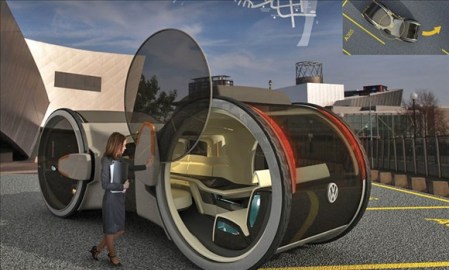 Morn the passing of the mini-van? The
Volkswagen T6 concept may be what your
future looks like. Said to contain a luxury
conference room and business amenities.

The Antro Solo is perfect for health minded
environmentalists. It gets up to 157 mpg when
charged with the roof solar panels, and in a
pinch the passengers can pedal it like a
bicycle to get exercise while saving gas.

There are a few examples of how our
transportation could look. I think we’ll
keep what we have.
Comments are always welcome.

It’s been how long?

While I was reading the morning paper,
reality slapped me when I wasn’t looking.
I read about a 45th High School Reunion
and thought ‘that’s a long time’.

Then I realized it was my graduating class!
Oops. Seems like only yesterday it was 1969.
We had a dress code, you could pray in school
without getting sent home but if you dropped
the F-bomb you were out.

Nixon was president, Neil Armstrong walked
on the moon, and we had Woodstock. There was
the march on Washington to protest the
Vietnam War, PBS TV station was established,
and Chappaquiddick happened,

The Pontiac Trans-Am was introduced, we got
our first look at Monty Python’s Flying Circus
on TV, and bell bottom jeans and tie-dye
shirts hit the fashion scene.

At the movies we watched Butch Cassidy and
the Sundance Kid, The Love Bug, True Grit,
and Easy Rider to name a few.

For music we listened to the Rolling Stones,
the Beatles, Crosby, Stills and Nash, John
Denver, Fleetwood Mac, Cream, Jimi
Hendrix, and many more.

Guess it was different. Now I have to oil
the wheels on my walker so we can go to
grocery store tomorrow and I need a nap.
Comments are always welcome. 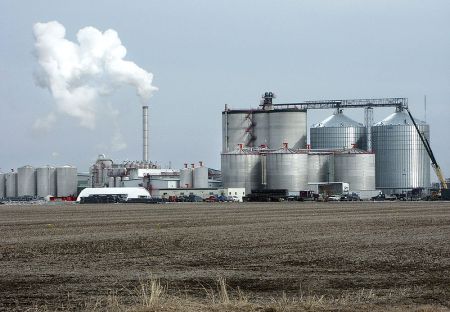 Ethanol is a touchy subject that not many of
us discuss. Those running the show will allow
no debate. It is what it is and don’t mention
facts.

The bull is out there and it’s getting
shipped by the tons. Some are buying it
and some are not, but what we get from
the politicians and the media is all
bull and no facts.
So here are a few facts.

What the ethanol fanatics don’t tell you is
that ethanol can have up to 33% less energy
than gasoline. You may say so what?

Engines not burning fuel at peak efficiency
have more exhaust emissions than those that
do. They pollute more and use more gas.

Two studies published in 2008 claimed
that biofuels like ethanol had no positive
effect on global warming, but are actually
bad for the environment.

And we all know the US Post Office is losing
money. So in a stroke of pure genius, someone
there came up with the idea to buy 30,000 new
mail trucks that can run on E85.

Soon that someone realized they were getting
29% fewer miles per gallon running E85
instead of E10. The fleet gas consumption
went up by 1.5 million gallons with E85.

It is also being said that if your vehicle
is a 2001 or newer you can run E15 with no
problem. Afterall the EPA approved the fuel
for these vehicles. But in real life, 25% of
the older vehicles that ran E15 experienced
engine damage or failure.

The subsidies to ethanol are still out
there, the politicians just learned how to
hide them better.

The Renewable Fuel Standards mandated that
a minimum of 37% of the 2012 corn crop be
made into ethanol. It can only go up from
there.

Ethanol is produced in Iowa, made with corn
which we grow in Iowa, and Iowa holds the
first Presidential Caucus in the nation.
Coincidence?

The future doesn’t look much brighter either
as the Renewable Fuel Standards and CAFE
Standards will mandate 40% ethanol by 2022.

We could go on but believe you get the
point. If you are tired of being treated like
a mushroom and fed bullshit while being kept
in the dark, go to your search engine and
see for yourself.
Comments are always welcome.