It’s officially Holloween and that can only mean one thing. For a few days we’ll see a lot more strange costumes than we normally do. Instead of the normal blue hair, pants at half mast and shirts ending above the navel, we will see some interesting and creative outfits. This is one day that puts most people in a jolly mood.

Then when Holloween is put to bed for the year comes another event.
Our local election. Due to circumstances beyond my control I haven’t done much posting on the event. Tomorrow I might just do a post on who I’d like to see on our City Council. Since I have the weird motor gene I don’t like to do predictions because they don’t work for me.

This election there won’t be a bunch of opponents for the incumbents and many are expecting a low turnout. I believe this is exactly the time we need to see larger numbers. I can’t pretend to know how things are going to turn out, but I do hope everyone who can excercises their right to vote.

We are going to get away for a short while this morning to maintain our semlance of sanity. We’re not sure if it will work but we have to try. Perhaps a leisurely breakfast and a little cruise will get rid of the cobwebs in the old cranium.
Comments are always welcome.

Happy Holloween to one and all. We hope everyone gets a chance
to enjoy the weekend. If you don’t do Holloween you can still have
fun this weekend. That being said, here are a couple local topics
that have nothing to do with Holloween.

If I remember correctly Alderman Bill Lynn will be a guest
on the Jim Fisher talk show this afternoon at 5 pm. If you
don’t normally listen but live in the 5th Ward and want to
learn more about Alderman Lynn it may be worth a listen.

A recent article in the QC Times regarding the Chorus
Line appeal and subsequent denial left me with a few
questions. The following is the denial letter-

This administration has been making a big deal about the H1N1 flu. It has been declared an emergency and there are both people who swear by the vaccine and people who wouldn’t get the shot under any circumstances. So as a public service we thought we’d help clear up the confusion.

I usually rant on Thursday but there is too much to work with and not enough space to cover it all. We’re watching the healthcare bill, the cap-and-trade mess, and several other things that we won’t get to today because my heart just isn’t in it. If you have a rant and care to share it, go ahead.
Comments are always welcome.

I’ve haven’t done a post on some of the things the FBI and other
agencies have been up to. The following is a sampling of what’s
been going on lately.

Federal, State, and local law enforcement officials recently
arrested more than 300 members of the La Familia cartel as part
of Project Coronado. This is the largest action ever undertaken
against a Mexican drug cartel. Over 3,000 federal, state, and
local law enforncement officers in 19 states was carried out
over two days.

This is part of a 44-month sting that has netted 1,186 arrests
since it began. In Project Coronado in addition to the arrests
mare than $32 million in our currancy was seized, more than
2,700 pounds of methamphetamine, nearly 2,000 kilos of cocaine,
around 16,000 pounds of marijuana and 29 pounds of heroin were
also scized. They also siezed almost 400 weapons. The drugs
were headed here and the guns to Mexico. To learn more go to
the FBI page.
The DEA has their version also.

In California, at the same time, Operation “40 Ounces to Freedom”
went down. This resulted in 74 members of the Rollin’ 40s Crips
arrest. For more on this go here.
Comments are always welcome

A while back in a post the subject of attendence at City Council meetings by Council members and who used the insurance offered. When I emailed Mr. Malin he informed me that there were no attendence records but one could find out by going through the Council minutes of the meetings to find out. I didn’t do that because I haven’t had time, but the following is his repsonse on my insurance question-

I apologize for the delay in getting this information to you, but there was a question that required research on whether the City could release part of the information requested. The information the City can release is as follows:

Upon legal review, what I can’t tell you is which elected official receives which of the above benefits. This information is protected by the Health Insurance Portability and Accountability Act (HIPPA) of 1996.

You can ask the elected officials, and they can tell you if they like, but I can’t release that information without their consent.

We are now well into the month of October but I got the
bug to see what has happened in history during this month.
So here are some things that occured during the month in
years gone by followed by a Holloween game. The game
shouldn’t scare you……….much.

On October 2;
In 1908 Henry Ford introduced the Model T.
In 1950 the Peanuts comic strip debued.
In 1959 the first Twilight Zone appeared on our TVs.

On October 3;
In 1789 George Washington proclaimed the first National Thanksgiving.
In 1863 President Abraham Lincoln declared the last Thursday
in November as Thanksgiving Day.

On Ocotober 4;
In 1861 the U.S. Navy authorized construction of the ironclad
Monitor.
In 1918 Germany requested armistice during World War I.

On October 5;
In 1892 the Dalton gang was killed robbing two banks in
Coffeyville, Kansas.
In 1921 the World Series was first broadcast on radio.
In 1962 the Beatles released their first hit song in the
United Kingdom. It was “Love Me Do”.

On October 6;
In 1956 an investigation into rigged TV game shows was began.

On October 8:
A telegraph line between Los Angeles and San Francisco opened
in 1860.

On October 9;
Leif Ericson discovered Vinland, 1000.
The Washington Monument opened to the public in 1888.

On October 11;
The first steam-powered ferry, the Juliana, began operation in 1811.
Kathy Sullivan became the first woman to walk in space in 1984.

On October 13;
A Naval force was established by the Continental Congress when it
autorized construction of two warships in 1775.

On October 14;
The first mechanical telephone switchboard was installed in New York
City in 1923. The exchange was called “Pennsylvania”.

On October 16;
John Brown seized the Federal Armory at Harpers Ferry in 1859.

On October 17;
Al Capone is convicted of income tax evasion in 1931.
The San Francisco Bay area earthquake occured in 1989.

On October 19;
Look magazine ceased publication due to increasing postal rates
in 1971.

On October 20;
The Senate ratified the Louisiana Purchase in 1803.

On October 21;
Thomas Edison invented the working electric light in 1879.
The Guggenheim Museum opened in 1959. At that time it was the
only building in New York City designed by Frank Lloyd Wright.

On October 22;
Sam Houston was sworn in as the first president of the Republic
of Texas in 1836.
Airplanes were first used on battlegrounds in 1911.

On October 23;
Twenty-five thousand women marched in New York City demanding
the right to vote in 1915.

On October 24;
A patent was issued for the safety match in 1826.
Nylon stockings were sold publicly for the first time in 1939.

On October 25;
The United States invaded Grenada in 1983.

On October 26;
The Erie Canal opened in 1825.
The International Atomic Energy Agency was established in 1956.

On October 27;
The Federalist Papers first appeared in a New York paper in 1787.
Dupont developed nylon in 1938.

On October 30;
George Washington established the U.S. Cavalry in 1776.
Orson Welles caused widespread panic during a radio broadcast of
“War of the Worlds” in 1938.

And lastly, the Holloween game. It looks pretty tame when you
click on the link but be prepared. If you still want to try the
game go here.
Comments are always welcome.

Comments Off on October stuff | 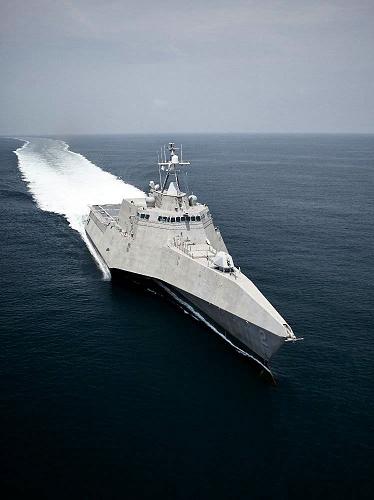 The picture is the USS Independence(LSC52) at sea.
They sure didn’t have anything like this when I was
in the Navy. This one looks like something out of a
James Bond movie to someone who served on a DDG.

The fact that this 418 foot long ship can do 47 knots
in spurts is something amazing. The fact that it has a
displacement of over 2700 tons and has a top speed of 50
knots is amazing. It is powered by Two gas turbine engines,
two propulsion diesels, and two waterjets. It’s a hot rod!

If you’d like to know more about the Littoral Combat Ship
you can go here
for more information and pictures.
Comments are always welcome.

Just Cruisin 2
Create a free website or blog at WordPress.com.